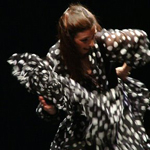 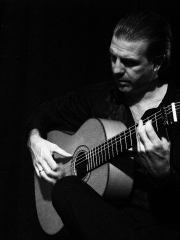 Chris Clavo
A founder member and musical director of Flamenco Express and Club Azul, he began playing the guitar at fourteen years old and later studied with flamenco maestros Manolo Sanlucar, Carlos Heredia, Diego Amaya and  Pepe Justicia.
He has performed throughout Britain and Europe with Flamenco Express as well as touring with flamenco jazz virtuoso Eduardo Niebla and Iraqi pop sensation Jassim.
As a composer/producer he has written and recorded scores for film, TV and theatre including work with Granada TV, Channel 4 Films, The Young Vic and the Royal Shakespeare Company. 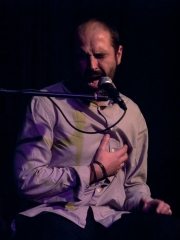 Javier Macias
Javier is originally from San Roque –Cadiz-, the birthplace Flamenco, from a family in which this art is way of expression and learnt this traditional art from a very early age. He has performed in Sevilla, Granada and Jerez de la Frontera since he was a child. And has performed extensively in Europe, participating in different projects including Café de Silverio, Trovador, La Tipica Flamenco Company and with The Royal Shakespeare Company in Cardenio. 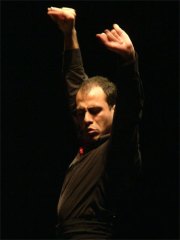 Titi Flores
A soloist of unique power and grace, Titi Flores has developed a style based on his extraordinary sense of rhythm. A gypsy from Arcos de la Frontera, he began his studies in Jerez de la Frontera in the dance school ‘Cristóbal el Jerezano’. His first performances were in Jerez in the Peña de la Bulería and the Peña el Garbanzo.
From the age of 15 he shared the stage with artists such as Camarón de la Isla, Paco Toronjo, Aurora Vargas, Chiquetete, Turronero and Chano Lobato.
He continued studies in technique and choreography with Antonio Canales, Javier Barón, Javier Latorre and Eva la Yerbabuena and took part in the X Bienal de Danza de Sevilla where he was a semi-finalist.
After relocating to Madrid he worked with La Tati, Rafael Amargo, Cristóbal Reyes and Juan Andrés Maya and has recently founded his own dance company – Compañía Titi Flores.

Manuel de la Malena
No true music lover can pass by the chance to experience Manuel’s brand of pure flamenco. His performances reveal flamenco as a truly universal art form, comparable with the highest opera or coolest jazz, and conveys the often tortured, often wonderful history of the gypsy people.
From Jerez de La Frontera, in the ‘golden triangle’ of flamenco, Manuel is the essence of pure flamenco. A descendant of Tio Louis el de la Juliana – one of the originators of modern Flamenco cante. And when he sings, that deep, colourful history fills the theatre. A regular prizewinner at festivals in France and Spain he has sung at the Festival de la Union, Cante Grande de Almeria and the National Festival de Cordoba working alongside legends such as Tio Borrico, Antiano Mairena, and Vicente Soto Sordera. 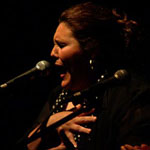 Ana de los Reyes
From the sizzling flamenco cauldron of Jerez, and internationally famed for her work with Joaquin Cortés in all the great metropolitan theatres, Ana is the epitome of a modern gypsy singer, a high priestess of duende, enchanting all around her.
In the powerful vocals of Ana de los Reyes there was a feeling that flamenco music had taken off on a roller-coaster ride… exhilarating, but scary.
Los Angeles Times 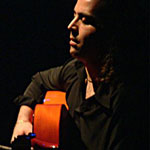 Jesus Alvarez
Anyone who claims to care about the guitar will welcome the chance to hear one of the best guitarists to emerge in the last ten years. A true rising star in the intense guitar scene of Jerez. He has performed and recorded with La Chiqui, El Mono, El Capullo, Diego de Morao, Mijito Hijo and many others. He has recently returned from performances in New Mexico and New York with Manuel and Antonio de la Malena, and from France with flamenco company Viejomundo. 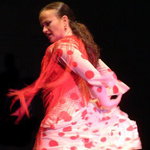 Gemma de la Cruz
Surrounded by flamenco as a child, she began classes at the age of ten, and went on to study at the Madrid Conservatoire and Studios Amor De Dios alongside Belén Fernandez and Belén Maya.
Her Spanish performances include the Teatro Español, Teatro Barcel, Teatro de la Plaza de la Villa, and Teatro de la Zarzuela in Madrid as well as Japanese and UK tours.